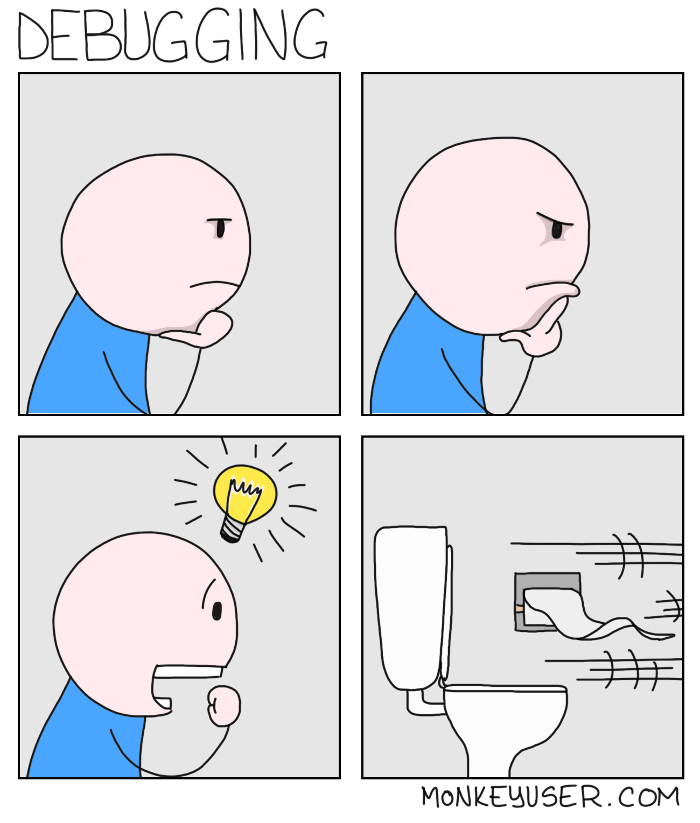 By default, gdb processes an expression as C code. func@plt is valid. Use quotes to pass special symbols.

gdb picks the first in the symbol table:

There is also .isra.3 which comes from -fipa-sra:

If a bug occurred recently and it didn’t exist in previous versions, it’s called a regression and it should be easier to debug. If the code is tracked by a Version Control System (VCS like Git or Mercurial), you can “bisect” the source code history to find the changeset introducing the bug. Git and Mercurial have a builtin bisect command:

The best is to have a reliable script reproducing the bug which returns 0 on success (test succeeded, no bug) or non-zero exit code (test failed, bug). Example of shell script:

The idea is similar to dichotomy: reduce the quantity of code that have to be read to find a bug.

Dichotomy or “divide to conquer” ;-)

The debug method can sometimes take several hours, so it’s nice to have “milestones”: backup points where the bug can still be reproduced. If you use a Version Control System (VCS like Git or Mercurial), you can use local commits (ex: create a local branch in git). Don’t worry of the change content or the commit message, plop is a great commit message for such changes :-) These milestones are important to be able to go backward if the bug cannot be reproduced anymore when you disabled too much code and features.

Debuggers are great, convenient and powerful. But. Sometimes, a bug cannot be reproduce in the debugger for an unknown reason, or the control flow is too complex to run the application in a debugger. For example, it’s hard to debug an event based application where a single logical “function” (or coroutine) is splitted into several small callbacks.

In such case, an easy method is to add “print” calls (ex: printf() in C or print in Python) in the code to “dump” the control flow, to try to bisect manually the code. Example of a Python function body:

Add print calls to see where the bug is triggered:

The last instruction was splitted into two instructions to see if the bug occurs before the call to func3() or after.

You can now remove the print("func1") line (to have a less verbose output), and continue to add print calls inside the func2() function. Iterate until you have a few functions to read to find the bug. It’s common to get the failing line in less than 5 iterations, the technic looks very basic, but it’s fast if the scenario to reproduce the bug is reliable.

Debugging can be painful, so don’t hesitate to make it more funny by using less boring messages than func1 or func3 :-) I’m using:

If the source code is not tracked by a Version Control System (VCS like Git or Mercurial), don’t forget to create backup of files to easily remove these print calls when the bug is identified.

Write a core dump in disk¶

Fedora catchs fatal errors like segmentation faults with its application ABRT. To develop, sometimes it helps to get a core dump. It’s possible to write a core dump on disk with:

It puts a breakpoint on the function func_clear() but stop if the the caller function name is not func_dealloc().